“Our industry is the least innovative” because it involves goods that are “all handmade,” asserted Mr Flatz, managing director of KTC Ltd.

KTC is a maker of technical sportswear and was founded in Hong Kong in 1971. Two years later the company landed German sportswear brand Adidas as a customer. The Hong Kong manufacturing operation moved to China in 1981 and expanded to Laos in 1996.

With a base in Asia, the company targets mainly the Germany, Austria and Switzerland consumer markets. The relationship with Adidas ended in 2005, but KTC managed to maintain a strong roster of sportswear brands as clients including Mommut, Helly Hansen, ON Running and Rapha.

In common with many other apparel manufacturers, KTC enjoyed decades of low-cost labour and abundant resources in China, a global hub for clothing production. That picture started to change recently.

Manufacturing in China is undergoing reform, at a time when higher labour costs have coincided with rising protectionism in a number of countries regarding cross-border trade. In China, that has meant a smaller number of factory jobs and a contraction in the employed workforce. Manufacturers have also chosen to relocate from China to other parts of Asia such as Vietnam and Cambodia, where labour costs remain relatively low.

According to the World Trade Organization, exports of Chinese textiles and clothing have declined since 2014. The country’s exports of clothing declined by 7 percent year-on-year in 2016.

“Because of the ‘one-child policy’, everybody is trying to get their kid to go to university. Nobody wants to work at a factory anymore,” Mr Flatz told Innovation Hong Kong in an interview on the sidelines of the Fashion Summit (Hong Kong) 2018. “At the moment our workforce is shrinking by 10 percent per annum. The average age on our sewing floor is 30 years old. But it should be 20.”

The result is increased labour costs. The minimum wage in KTC’s industrial sector, according to Mr Flatz, is up from RMB300 per month 15 years ago to RMB1,500 per month this year.

Automation doesn’t solve the problem, he added. Although there are several technologies available in the market, such as automated sewing machines, such innovation in the market for technical sportswear remains limited and apparel manufacturing will always be labour intensive, he stressed. So far, only 20 percent of processes at KTC are automated, chiefly in the cutting phase, via laser cutting technology.

“We rely on employees, and that’s not going to change,” Mr Flatz noted.

Despite the challenges, the executive said he has no plan to end his more than three-decade-long relationship with the China manufacturing sector, although he will be clear-sighted if the day comes for such a business decision.

“For me when it’s over, it’s over,” he said firmly. “Our product can only be produced here because of the craftsmanship and the quality of it. Chinese manufacturing is super-efficient and flexible. The workers have a skill set which is unparalleled in the rest of the world.” 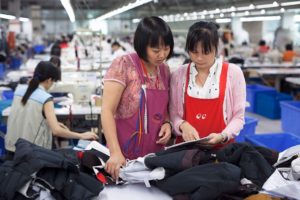 Relocating to cheap-labour countries might put quality at risk, he added.

Manufacturers for the well-known brands “are in competition with low-wage countries,” but such countries might not be able to manufacture for premium brands that have “concern about quality,” noted Mr Flatz.

He said such downward price pressure was fuelled by “stupid” consumer behaviour.

“Price is the top reason that drives purchase decisions today,” he stated, referring to the retail customer. “Nobody is looking for innovation. When everything is price-driven, who is willing to invest in research and development and to pay for innovation? This is the biggest obstacle in the supply chain these days,” he lamented.

The consumer “isn’t really interested” in where the products are being manufactured said Mr Flatz. “If you ask them to pay 20 to 25 percent more,” for such assurances, “they tend to go for the cheaper” products, he notes.

As a result, he said, the manufacturing industry is falling short in terms of innovation.

“Innovation in our industry is not about innovating on the product, but more about making the supply chain more efficient in order to be able to offer more competitive pricing and thus helping brands earn more money,” stated Mr Flatz.

As a way out of such an impasse, Mr Flatz is trying to market KTC as what he terms an ingredient brand, eliminating third parties – namely brands, distributors and retailers – from the production process in order to reach out directly to customers. This involves investing seed capital in a number of consumer-facing start-up businesses.

“High manufacturing costs in the Pearl River Delta won’t allow us – going forward –to sell to brands, who are selling then to distributors, and then to retailers,” he noted, referring to the coastal manufacturing area of Guangdong province next door to Hong Kong.

“I strongly believe the only way for manufacturers to stay profitable is to bond directly with the consumer,” added the executive.

With this in mind, the manufacturer co-founded Fision Technologies in 2015, a venture that aims to produce tailor-made garments for e-commerce via use of body-scanning technology; and Paskho, a travel and leisure brand that aims to produce – on behalf of the KTC label – activewear that is fashionable and functional.

In Asia, the company is bringing the KTC name onto the fashion runway via an ongoing co-branded collaboration with Chinese designer Yang Li.

“It’s a small-scale collection with a maximum of eight pieces for two seasons. But it’s a good way to increase exposure and publicity for our brand,” Mr Flatz explained.

The clothing supply chain today contains a series of steps that are effectively isolated from each other: from manufacturing, to distribution, marketing and point of sale, the entrepreneur stated. They operate independently with little transparency, meaning nobody understands what others are doing within the network. Too often, said Mr Flatz, collected data is manipulated somewhere in the flow from manufacturing to receipt of goods by the retail customer.

To address the problem, the company is laying the groundwork to use blockchain technology for transacting its business processes.

Blockchain – best known to consumers for its association with cryptocurrencies such as Bitcoin – is a ledger for recording trades and transactions. It is available to everyone and it is highly secured because, unlike the banking system, these trades and transactions are not controlled by one single organisation but by the majority of participants in the mechanism.

When applied to the supply chain, theoretically, blockchain can keep the collected data from being manipulated, in turn enhancing transparency and agility within the supply chain. Every trade of a product changing hand will be recorded and tracked in the mechanism, from production to the point of sales, explained Mr Flatz.

“We call it C2A, consumer to artistry, connecting the consumer directly with our workers.

“Each individual process step needs to be registered so that it can be written on blockchain,” he noted. As a result, it was “difficult to predict” how long it would take the supply chain to get ready for this way of doing business.

Nonetheless such steps were just the beginning, said Mr Flatz. If executed correctly, blockchain was the best answer to the business challenges of manufacturing, he suggested.

“We will only succeed with supply chain transparency where the consumer bonds with the manufacturer,” the executive added.