For Taiwan industrial firm Far Eastern New Century Corp the concept of recycling, and that of the “circular economy”, have been at the heart of its business for decades, it says.

“Recycled polyester is extremely important for us,” noted Jeffrey Hsu, manager for the company’s research and development centre and for innovations, marketing and partnerships.

An example of polyester waste is the plastic bottles used around the world to sell drinking water.

“We actually started doing recycling back in 1988, before it became a hot button issue,” he told delegates at the Internet of Life Summit 2018 in Hong Kong. “That is because Taiwan is a place that is so resource-strapped, that we can use recycled polyester as a resource… and make various different kinds of goods and materials,” out of it, he added. 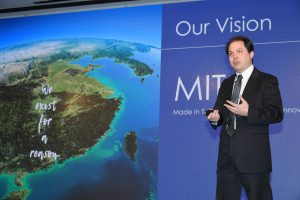 The business executive said Taiwan recycles polyester “at a rate of 95 percent”; a world-leading level, followed by Japan and Germany.

Of that 95 percent rate in Taiwan for recycling of polyester, “50 percent is recycled by Far Eastern New Century,” said Mr Hsu.

The executive suggested that globally, 2.5 million tonnes of plastic waste pollute oceans every year. Since 2016, the firm has had a partnership with Parley for the Oceans – a U.S.-based campaign group for marine environment protection – and sportswear maker Adidas AG.

“We are taking that ocean waste material and then manufacturing a brand new shoe out of it, with the exact same performance parameters as you would have from virgin petrol-based material,” stated Mr Hsu.

The executive however noted that a challenge in the recycling story is that bottle waste only accounts for “about 30 percent” of the world’s total amount of polyester waste.

While polyester bottles can be used to make yarn for spinning textiles, a finished textile garment typically has “very low energy density,” said Mr Hsu. Once the consumer discards it, “there’s very little value beyond landfill today,” he asserted.

In the concept of the “circular economy” – an idea promoted by several leading international scholars – a goal is to create closed “loops” of economic activity, whereby resources can be used again and again with little need for fresh inputs of virgin materials.

Far Eastern New Century’s Mr Hsu said the company was currently trying to close one of those loops via remanufacturing from that low-density textile material.

“We are also now working on textile waste material. Polyester textile waste: keep your eye on the news. We are going to be making some headlines within the next two years in terms of closing this loop, so we will finally have an infinite cycle of polyester to use,” he stated.

In January Far Eastern New Century Corp listed NTD3 billion (US$102 million) in green bonds on the over-the-counter market, making it the first private-sector Taiwan manufacturer to sell such bonds in the local market, according to the Taipei Exchange. The proceeds would go toward funding environmentally friendly projects, the bourse said.