Twenty Swiss tech-driven startups took the global stage at the SwissTech Pitchinar world premiere on 10 June, (2020) from Shanghai,China. The event, in webinar format, was organized by swissnex China in collaboration with SwissTech, CES ASIA and Venture Leaders, with the support of institutional partners. 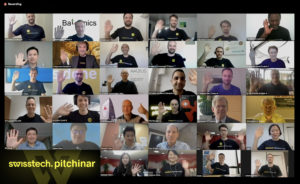 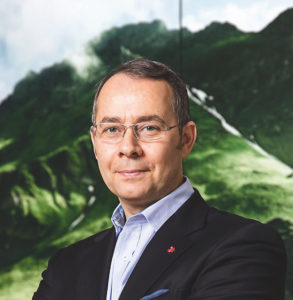 “Today, we pioneered a powerful virtual platform for Swiss startups to establish game-changing partnerships with investors, mentors, experts, potential business partners and highly-engaged audiences on a global scale: an unprecedented way to add value and build bridges”, said Dr. Felix Moesner, Science Consul and CEO of swissnex China. “We saw overwhelming interest in our DeepTech startups and wish them every success with their many follow-ups.”

The winner of the event was Mithras Technology, an IoT startup that developed wearable technology -turning human body heat into usable electricity.

With this technology, the temperature difference between the thermal interfaces to skin and ambient, charges an accumulator that conveniently stores the energy for later use. Users of these devices will have the opportunity to extend the battery life of wearables / portable products and to remove the need for battery replacement and recharge of multiple health-related devices. In turn, these devices will reduce their local demand of energy in the greenest way possible.

“This was completely unexpected. We feel very proud and honored to have won the first SwissTech Pitchinar 2020! We already received lots of positive feedback from people reaching out to us, which could result in very interesting leads and this highlights the inestimable worth of such events”, said Franco Membrini, Founder & CEO of Mithras Technology. 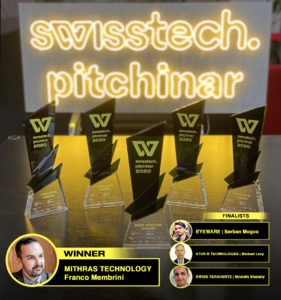 The three finalists were:

-Swiss Terahertz:High tech terahertz laser technologies for security and quality control. The start-up focuses on the terahertz radiation which is presently the most advanced
technology for non-destructive testing and non-ionising security scanners.

The outstanding performance of all participating startups demonstrated the strength of the Swiss innovation ecosystem and the calibre of world-class Swiss universities.  Swiss Ambassador to China Bernardino Regazzoni virtually awarded the trophies to the selected startups.