At the Healthtech O2O summit on day one of the StartmeupHK Festival 2019- organised by Invest Hong Kong (InvestHK) and hosted by NexChange- the opening keynote was delivered by Dr. CHUI Tak-yi, JP, Under Secretary for Food and Health, Government of the Hong Kong SAR.

Dr. Chui stated that the government will move forward with a large-scale genomic sequencing project to enhance the clinical application of genomic medicine and innovative scientific research in Hong Kong. “The Hong Kong Genome Project aims to sequence 50,000 genomes related to 20,000 cases,” he said. “The Hong Kong government will set up a new entity, Hong Kong Genomic Institute, to spearhead the project. The biotech sector will definitely be a major partner in this initiative.”

Besides genomics, he said: “We fully recognise the possibilities with healthcare big data research and its important role in shaping our healthcare development, particularly for providing useful information about business trends and risk factors, as well as efficiency of treatment methods and cost effectiveness of health initiatives.” Commenting on the development of IT infrastructure, Dr. Chui said: “We launched the electronic health record system in 2016 to enhance the quality and efficiency of healthcare. The electronic healthcare system allows for the sharing for patient data between healthcare providers in the public and private sectors. The information shared will form patients’ lifelong health records. In a couple of months, we are expecting the one millionth patient registration, a milestone for us.”

Stephen Phillips, Director-General at Invest Hong Kong, in his keynote speech noted how healthtech is something that touches us all and emphasised how the Hong Kong government has prioritised the sector. During the past year, the government has provided the sector with HK$78 billion (US$10 billion) in financial support, through a variety of investments, incentives and tax breaks. He added that the number of startups in Hong Kong grew by 18% in 2018, with jobs in the sector up 51% on the year, citing a recent InvestHK survey.

“R&D and talent are really important,” he said, adding that a number of the world’s leading universities, including Harvard, Stanford and the University of London, have set up programmes in Hong Kong. “Expect healthtech and biotech companies to grow in Hong Kong,” he said. Besides having access to capital – a feature of Hong Kong – the new HKEX rules benefit biotech and healthtech companies in particular. One thing is certain, he added: “Hong Kong is a life-long commitment for companies moving here.” Dr. Cheung said the Hospital Authority has a long-term strategy in place to deliver next-generation clinical management, enhanced patient experience and digital management. “We focus on technology that will deliver service impact,” he said. He added that a new form of governance was needed for innovation, because the normal system would not work – too slow. The process in place to review ideas and concepts and take the best ones through to funding and piloting may seem complicated, he said, but it’s much easier than what went before.

The Hospital Authority’s first patient app came out in 2011. By 2018 it had 15 apps in operation – many intended as temporary, but not replaced. Dr. Cheung said they are now focusing on one single patient app. “HA Go is the name of the new app,” he said. “It has not yet been released.” He said it will trial in the second quarter and be released in the fourth quarter of 2019. It will handle appointment, payments, drug and rehab, along with other features as they get added.

“We’re pushing into an era of data-driven care,” he said, adding that the Hospital Authority provides decision support in medications, such as drug combinations, for allergies and other conditions, and timeframes for drug usage. In 2017, he said, doctors changed their orders on 95,000 occasions based on computerised alerts. The concurrent safety checking – decision support at scale – and reviewing decisions, as well as providing check-lists for what might have been overlooked, create major savings and better healthcare.

Hong Kong’s aging population is a big issue and a big driver for innovation. “Old people consume six times more healthcare per head,” he said. “We have massive healthcare needs and fewer young people to provide it. Business as usual isn’t going to cut it.” 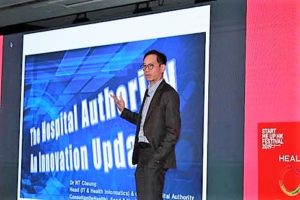