Plant Based Foods Industry Association’s [PBFIA] first major report, The Dawn of a Plant-Based Age was launched at the Plant Based Food Summit in New Delhi on May 26 [2022] by Mr Sanjay Sethi, Executive Director.

The report provides an overview of the global plant-based foods market and potential opportunities that will enable India to lead the way to global food security and nutrition.

We are pleased to provide the overview provided as Chapter 1 of the report here: The plant-based foods sector is growing rapidly around the world across key metrics: consumer interest, product sales, and private and public investment. Most importantly for its near-term growth, the sector has entered the mainstream and attracted interest from consumers who do not define themselves as vegetarian or vegan.

Significantly increased investment in research and development for both product characteristics and manufacturing processes are also providing a strong foundation for the relatively young industry. Globally, the future of the plant-based foods sector is bright – the sector’s growth is certain, even as its path is still being charted.

Comprehensive global data on the plant-based sector is still limited, but data from specific markets provides insight into the sector’s overall trajectory.

Asia Pacific led the plant-based milk sector in retail sales in 2021 with $9.4 billion and also saw the largest growth at 16 percent. Sales were comparable in Western Europe and North America, at $3.5 billion and $3.3 billion, respectively, with the growth rate in Western Europe more than doubling that in North America. Sales in the rest of the world were just over $1.6 billion, though every region saw significant growth.1

Notably, when including tofu in the plant-based meat category, Asia Pacific again leads the pack at a value of over $16 billion in 2020. China is the largest market in the region, accounting for 70 percent of the total value.2

As consumer interest and sales grow for the sector, there has been an accompanying surge in private and public sector investment. Such investment is driving the swift growth of new companies like Beyond Meat and Oatly, the adjustment of priorities for industry giants like Nestlé and Unilever, and an explosion of startup companies bringing new products to the market. Investment is focused on both increasing consumer access and product improvement – companies are improving recipes and rereleasing established products, such as the Beyond Burger 2.0 and 3.0, and both public and private sector funding is focused on improving manufacturing processes and product characteristics (e.g., taste, texture, nutrient content). Following the same trajectory, the number of investment deals increased from 5 in 2010 to 140 in 2021. The investor pool is growing as well – the number of unique investors grew by 40 percent in 2021, with 312 new investors of the total 1,093 investors in the sector since 1980. Two standout events from 2021 include Impossible Foods raising a $500 million funding round and Oatly’s IPO raising $1.43 billion.1

Regionally, North America led in both investment capital at $1.2 billion and deals at 63 in 2021 while investment topped $800 million in the rest of the world. Investment in Latin America was $310 million with only 7 deals, whereas Europe and Asia Pacific each had less total investmentacross a higher number of deals, at $248 million with 42 deals and $220 million with 25 deals, respectively. The Middle East only saw $35 million invested with 3 deals.1

While commodity crops will continue to be appealing for manufacturers in the near-term, the landscape is changing as companies explore the use of a wider range of ingredients and crops are bred to have improved characteristics. Innovation in the plant-based egg sector has seen the use of lentils, mung bean, and chickpea by companies like Eat Just (US), Eggcitables (Canada), and PlantMade (India).7,8 Even seaweed, which has an advantageous mix of high protein content, low environmental footprint, and processing functionality – such as seaweed is attracting significant attention.1

Advancements in breeding could significantly improve crop utility for use in plant-based foods, such as by increasing protein content, improving solubility and water-binding capacity, and decreasing the level of metabolites and enzymes which can negatively impact taste.1

The rapid growth of the plant-based foods sector has put it higher on governments’ agenda.

Viewing the sector as both an economic growth and sustainability opportunity, governments are beginning to proactively invest and foster growth. Governments are investing hundreds of millions in the alternative protein sector, including announcements and grants which top $460 million to expand plant-based food R&D and processing capabilities. Canada is leading the charge, while Australia, Denmark, Finland, Japan, United States, have invested as well.9 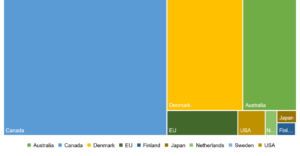 In 2018, Canada announced an agreement to invest $153 million in the Protein Industries Canada Supercluster– a coalition of businesses, academia, and nonprofits – and will be matched dollar-for-dollar by the private sector.10 One example of such investment is an $8 million public-private investment project to develop new plant-based foods and ingredients utilizing some of Canada’s most widely grown crops.1 In Denmark, the Danish Ministry of Food, Agriculture and Fisheries launched Plantefonden, a $98 million investment fund to support development of new crops, cultivation methods, processing methods, product development, and public education.11 In Australia, the government is contributing $65 million to a public-private project to construct three plant protein manufacturing facilities to supply both domestic and international markets.12

Regulatory approval of novel ingredients and debates on labeling have been complicating factors for the sector’s growth, but thus far the impact has been minimal. While pressure from industry associations representing animal-derived proteins have argued that using nouns like “burger” and “sausage” or adjectives like “buttery” can confuse consumers, regulations to censor the terminology of plant-based foods have largely stalled. At the same time, approvals for novel ingredients – such as Eat Just’s mung bean-based eggs in Europe and Impossible Foods’ heme ingredient in Australia and New Zealand – are opening new markets for plant-based food companies and setting the stage for continued growth.1

Analyzing the potential growth for alternative milk and meat (potentially inclusive of plant-based, cultivated,  and/or fermentation-derived products), Credit Suisse projects global sales of alternative dairy and meat to reach between $146 billion and $380 billion by 2030. By 2050, the bank projects sales between $748 billion and $1.4 trillion.13 Market growth is driving innovation for plant-based foods at every step of production. 2021 saw an expansion in the number and utility of plant-based ingredients, advancements in the efficiency and scalability of processing techniques, developments in the use of novel technologies (e.g., 3D printing, high-moisture extrusion technology), and improvements to the nutritional and sensory components of products.1 On the production side, such innovation will bring a range of new, improved products to market at increasingly competitive prices compared to animal-derived products.

For consumers, the strong nutritional profile of plant-based foods will be essential to widespread uptake and particularly so for children. Examples of such products exist in the market already – Ripple fortifies its plant-based milk for kids, which has DHA, choline, prebiotic fiber, calcium, magnesium, riboflavin, and vitamins A, D, and B12; Danone launched Wondermilk which has the fat, vitamin, and mineral content of cow’s milk; and Unilever has developed a fortified soy product for the South African market that is more nutritious than the animal-derived mincemeat it replaces.1,2 Additionally, Danone’s Silk brand and Danish brand Naturli’ have products which aim to replicate the sensory components of cow’s milk, which could catalyze the transition of consumers who currently prioritize a familiar taste, texture, and aroma.1

The Good Food Institute projects 2030 production requirements will outpace the industry’s supply network capabilities without an increased rate of investment, particularly for pea and soy proteins. There has been recent evidence of this in the market already. Focusing on pea protein, which has seen significant growth in the last decade, the sector will likely require 10x the current projected global supply of enriched forms of pea protein by 2030 – accounting for 34 percent of pea production overall.6 At the same time, there is increasing interest and opportunity for utilizing a wider range of plant proteins, such as fava beans; for instance, Nutris Group invested $32 million in a hybrid processing facility for fava beans and potatoes and Beneo invested $53 million in a processing facility for fava beans.14 The future demand for plant-based food ingredients is difficult to predict and will almost certainly change as research improves manufacturing processes and the nutrition, functionality, and yields of crops themselves. In all likelihood, as with the plant-based sector as a whole, the future market will be driven by the research and investment of the next decade as the sector grows into its potential.

2.2021. Appetite for Disruption: The Last Serving.

This report is a private initiative of the Plant Based Foods Industry Association.