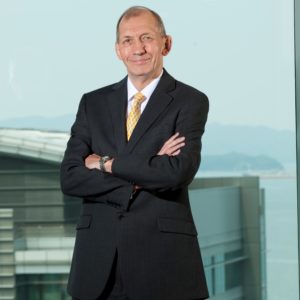 Nicholas Brooke is a man who wears many hats in Hong Kong. From co-founding the Hong Kong Science and Technology Park to serving as Chairman of the Harbourfront Commission, it’s fair to say the future of the city is never far from his thoughts. Innovation Hong Kong spoke with him regarding the Harbour, science, creative labour pools, artificial intelligence in Shenzhen, and the 2020 and 2030 Beijing benchmarks for Greater Pearl Bay.

Innovation Hong Kong: How do you think the Hong Kong Harbour Front can inject innovation into the city?

I think we can urge innovation through a whole series of initiatives. For instance, we’re looking at an elevated way around the harbour linked to different attractions. There is opportunity to do things with solar power with the lights along the harbour. We’re also looking at innovative ways of moving people. We have 73 kilometers of waterfront and there is a need to figure out how you can move people around it.

Innovation Hong Kong: How might the ‘Eye of Hong Kong’ area be developed for creative businesses?

It should and it can be developed for that, as a prime area in Hong Kong; It’s a ‘Jewel in the Crown’ if you like. I think we should have some major attractions there. Whether the wheel is the right attraction is another question. There are many other wheels around the world. I think we can do better. For that area now, we have shows and events and festivals, and there is an active community who attend them.

Innovation Hong Kong: As a key founder of the Hong Kong Science and Technology Parks Corporation, what are some of its achievements that you are truly proud of?

Creating a platform, if you like, for software and hardware infrastructure to support innovation and technology in Hong Kong is important. We faced a lot of ‘doubting Thomases’ that Hong Kong would become a center or hub of innovation and technology. Quite frankly we’ve proved them wrong. To do that, we had to create this platform. As you know, it’s not just the buildings, its all the software, the whole chemistry and synergy of the park. I think its all come together very well.

Well, Phase III was obviously the last phase and saw green technology as very much the driver. This meant that the design of the buildings is very much a sustainability model. It has become a showcase for sustainable development in Hong Kong.

Innovation Hong Kong: As a senior member of the Hong Kong General Chamber of Commerce, how do you view the chamber taking an initiative to push businesses to develop creative culture in the city?

I’m a great believer in pilots and case studies. I think it’s a shame that more community initiatives that foster innovation technology, and do it at the grassroots level, aren’t done as much. Where this is done, over time, they grow can into much bigger initiatives. That’s one way to get involved.

There’s a window of opportunity for innovation and creativity, which the chamber has done a lot to engage the Greater Bay Area, particularly the West Bank of the Pearl River. Helping them capitalize on opportunities is something the chamber can get more involved with.

Innovation Hong Kong: Do you think Hong Kong can realistically compete with Shenzhen for Artificial Intelligence?

I don’t see it competing but more of complimenting, in all honesty. In terms of relative positioning, this is where people prefer to do their very sensitive R&D, if you will. They prefer here to launch their ideas because it’s fairly safe. If you want to focus on production this is where Shenzhen comes in. So, Hong Kong is where you have the original ideas and research, and then the development of proto-types and commercialization of those ideas are for Shenzhen—and this seems to be working quite well.

Innovation Hong Kong: As the Principal Advisor on APEC’s Policy Partnership on Science, Technology & Innovation, how would you rate Hong Kong’s chances of success towards 2030 given the “New Era” announced during the 19th Congress in Beijing?

We are very well positioned, as you know. We have a very big role in the Greater Pearl Bay Area project, and Beijing is pushing us towards that. I think you can recognize the value of One Country, Two Systems. We have the advantage of One Country, but we also have the Two Systems, and this is where Hong Kong is valuable to capitalism.

Well, not to name any names, but I mentor a whole range of young people, young entrepreneurs. I have no doubt about them. They do need a bit of mentoring and nurturing, but I do feel we have tremendous talent here. In a way, innovation and technology in Hong Kong has survived so far by adapting and changing.

Innovation Hong Kong: Are there are any contradictions in the goals of becoming a creative, hi-tech hub and also being affordable for the workers to sustain it?

There are contradictions unless you address issues such as housing and the cost of doing business in Hong Kong. Carrie Lam and her new team are obviously getting into that. It does take time and there is no quick fix if you like. This is a dichotomy that has to be dealt with to support hi-tech, and the problem of the cost doing business and cost of accommodation. It is something that the government is at least aware of and trying to supply more lands for housing.

Innovation Hong Kong: As a member of the Commission on Strategic Development and the Working Group on Manufacturing Industries, Innovative Technology, and Cultural and Creative Industries of the Economic Development Commission in Hong Kong, what are some things these groups are doing with the Greater Bay 2020 Master Plan in mind?

I think what’s happening in the Greater Bay Area in terms of connectivity, both physical and soft, is going to change so much. We must be ready to take advantage of this as change is coming, and it’s coming in a major way. There are 60 to 70 million people within an hour of Hong Kong all connected by high-speed rail. This is coming and we can it ignore, if you like, but that would be to our great peril, and a great shame. I believe we must come up with a roadmap. If we do, I think it’s a major opportunity.

Sometimes, I think we’re in danger of doing too much soul searching. You only have to go out and see the benefits of living and working in Hong Kong. It just lends itself to a huge entrepreneurial engine.