Named after the famous bird of prey, the MILAN RED is designed by a team of extraordinary specialists aiming to combine the skills of speed , design and an ultra-intense driving experience. Austrian born Markus Fux, 36, CEO of MILAN Automotive GmbH is bringing the cutting edge know-how of Austrian companies to market- uncompromising in design and technique.

MILAN Automotive GmbH is an Austrian based car manufacturer – the first and only producer of Hyper Cars  that are ‘Made in Austria’.Only 99 MILAN RED cars will be produced for this limited edition first of its kind crafted by MILAN Automotive GmbH and comes with the following capabilities: 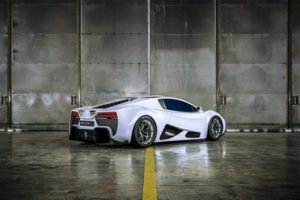 The MILAN RED will be manufactured wholly from carbon. This is produced by PEAK Technology from Upper Austria. Another special add-on -in context with the stunning interior design- is the visualisation of the driver’s heartbeat.

The MILAN RED costs close to 2 million Euros and has already inspired 18 car enthusiasts to add the MILAN RED to their portfolio.Markus Fux, CEO, is a former race driver and thus brings a deep understanding of speed and has a wide varieties of contacts in the racing car world. He stated at the launch in Leobersdorf, Austria on July 30: “Nowadays you can drive an artistic car, a high-tech-monster, a throne on four wheels – or a car, that only serves one purpose: stealing the show. And this is where we come into play.”