Hong Kong scientists are working on exploiting on an industrial scale a technical breakthrough they have made in recycling. It involves textile waste- what might otherwise be regarded as unattractive material for re-use because of its low energy density.

In September the Hong Kong Research Institute of Textiles and Apparel (HKRITA) – a body supported by the Innovation and Technology Fund of the Hong Kong government – and the Institute’s research partner, the non-profit entity H&M Foundation, announced a breakthrough in recycling of blended textiles into new fabrics and yarns. The statement said an important factor in the discovery was that the process could be achieved without any loss in quality of material, and via a hydrothermal – chemical – process.

“We are going to build a recycling factory to look locally at how we can recycle apparel, to take care of the problem we [as consumers] created in the first place,” noted Edwin Keh, chief executive of the HKRITA, in a presentation at the Internet of Life Summit 2018 in Hong Kong. The event was part of the StartmeupHK Festival 2018, an initiative of the city’s inward investment agency, InvestHK.

“We will process old apparel, turn it into yarn and then into new apparel. That should be [starting] in September this year,” said Mr Keh. “That’s why we are working with H&M. They say they can supply us with lots of stuff to work on,” he added, referring to the Sweden-based retail brand. 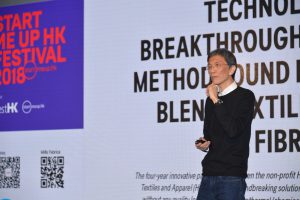 He stated: “Hong Kong sits in the middle of the global supply chain for fashion, textiles and apparel… So what can we do is really make sure we have a holistic view of what’s going on and create value for everyone in the supply chain.”

Mr Keh noted that amid scientific advances in other sectors such as digital technology, the textiles sector had not really kept pace. The Institute was working to change that in areas such as development of new materials.

“We want the industry to be more competitive. It has to look more like an industry that can do things efficiently… we want to move with society,” he stated.

“Globally, societies are changing; populations are ageing. We all aspire to live more active lifestyles, but we need some help in that area,” said Mr Keh.

According to estimates issued in September by Hong Kong’s Census and Statistics Department – looking at the city’s population trends from 2017 to 2066 – the number of people aged 65 or over living in Hong Kong is expected to be more than double in the coming 20 years.

In the past five years, the Institute has won 45 global invention awards, including 10 in 2017.

In January, the Institute demonstrated at TKO Plaza at Tseung Kwan O in the New Territories, what it described as “Technologies for Healthy Ageing”. They included textiles that provide a self -cleaning function via the use of nanotechnology. The nano layer breaks down and removes dirt, odour, bacteria, colour stains, harmful organic materials, such as formaldehyde and other carbon-based molecules with the help of visible light or an indoor light source, in a process known as “photocatalysis”.

As well as addressing the beginning and end of consumer part of the cycle, the Institute is also seeking to address the bit in the middle. “We look at the agility of the supply chain,” Mr Keh stated. “We are working on predictive analytics, so we ask ourselves, ‘What will sell in 90 days?’ And we’ve developed an algorithm to predict that.”

The body is also looking at sustainability. “One of the things is to take water out of the equation. How can we do things in a completely dry environment? There are several waterless technologies we are working on,” Mr Keh said.

“We are working on energy efficiency: using fewer resources to make things. Detoxing the supply chain: taking harmful chemicals out of the supply chain; recycling; circularity. How can we get more out of the materials we use? And green materials: are there new materials that are more benign to the environment?”

He added the Institute was also working with The Mills, an urban regeneration scheme in Tsuen Wan in the New Territories, to set up a shop selling products developed by the Institute.

The Mills is a scheme of Nan Fung International Holdings Ltd – a Hong Kong conglomerate that started as a textile manufacturer – and is reusing the shell of a former company factory. The Mills is due to open this year, and will feature a business incubator, shopping mall and non-profit cultural institution.