People can live happier and healthier lives via collection and efficient use of their own data as it relates to vital functions, says Alan Patrick, head of sales at Biorna Quantics, a business based in Kennedy Town, Hong Kong. 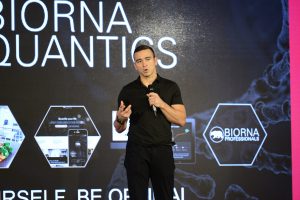 The underlying digital technology that has allowed the collection and analysis of such data also puts power – and responsibility – for healthy living in the hands of each individual, he said during a panel at the Internet of Life Summit 2018 in Hong Kong.

“You shouldn’t have to wait until you’re ill, to seek health advice. We believe you should be able to get that on a daily basis, and have ownership of your health – and importantly – know what works best for you,” stated Mr Patrick. He was speaking during a so-called fireside chat at the event – part of the StartmeupHK Festival 2018, an initiative of InvestHK – titled “The Future of Health is Your Responsibility”.

Mr Patrick’s business offers services including what it says is a set of proprietary tests of DNA. From a mouth swab, Biorna Quantics states it can offer advice on optimal dietary and exercise plans for each client, based on that client’s unique genotype.

“Lab tests and wearable technology have been around for a long time,” said Mr Patrick, referring to the way consumers typically receive information about their health and fitness either from medical tests – often conducted after an issue has arisen – or from smart watches and software apps that measure things such as heart rate and blood pressure.

“The problem is, once you have the results, you have to take the actions to improve your health or fitness… or both… That’s not always being done at the moment,” stated Mr Patrick.

He suggested one answer was for consumers to take advantage of businesses such as his that offer an overview based on genotype, rather than a ‘one size fits all’ approach.

He was in conversation with Bay McLaughlin, chief operating officer and co-founder of Brinc, a business based in the Central district of Hong Kong.

According to its website, Brinc was set up in 2014 to accelerate technology hardware product start-up companies from conception, through business development, “consumer validation”, manufacturing support and distribution. Brinc also has offices in neighbouring Guangzhou in mainland China, and in Barcelona, Spain.

Brinc focuses on the so-called Internet of things: technology that exists in the physical world but can also be interrogated, can communicate with or be operated remotely by a human consumer using Internet-connected technology.

The Internet of things includes the concept of the “quantified self”, notes Brinc on its website.

“Quantified self is everything from your Apple Watch to your Fitbit [device] to your sleep tracker, to what you eat, to lab tests,” Mr McLaughlin told the audience.