We are pleased to provide the Trends in India provided as Chapter 2 of the report released by the Executive Director of the PBFIA at the Plant Based Summit in New Delhi here: The plant-based foods sector is still young in India, but early signs point to a significant opportunity for growth. Consumer interest is high, private sector companies are coming to market at a rapid pace, and the strength of the agricultural sector provides a strong foundation for growth.

While both plant-based meat and milk categories will grow, milk is expected to occupy a more significant percentage of the market than elsewhere in the world given the population’s current and projected consumption of milks. Per the FAO, animal-derived milk provides 7x the grams of protein per capita than the next animal-derived food – freshwater fish – and it is projected to account for 88 percent of the increase in India’s animal protein availability in the coming decade.15,16 Over time, as consumer exposure grows and price parity is widely achieved, plant-based milks could occupy a significant proportion of the overall milk market.

Meanwhile, the true potential for the animal-based meat market is difficult to project based on consumption of animal-derived meats in India or recent consumption trends of plant-based meats elsewhere in the world. The religious and cultural factors which limit consumption of animal-derived meats in India do not apply to the plant-based sector. 30 percent of the Indian population identifies as vegetarian, compared to 5 percent in the United States; moreover, per IPSOS, 56 percent of the Indian population would “prefer not to eat any meat, poultry, or fish” compared to 16 percent in the United States.17,18 Additionally, because current per capita consumption of animal-derived meats is relatively low (4.3 kilograms per year compared to 101 kilograms per year in the United States), there are not as widely engrained expectations for the taste and texture of meats.19 As such, the plant-based meats sector is relatively larger and less hindered compared to the markets where plant-based meats are already growing rapidly.

Consumer awareness and utilization of plant-based foods is flourishing in India, particularly for plant-based milks. Considering the relative size of the plant-based sector overall, market penetration is significant. Supported by Bollywood stars and social media influencers, the sector is increasing and diversifying how it reaches potential consumers. A beneficial sign for increased market acceptability and uptake, taste is a comparable driver for plant-based and animal-derived milk consumption. Perceptions of taste and versatility will only increase over time, as products continue to improve and consumers gain familiarity with the tastes and flexibility of plant-based products. Furthermore, as prices for plant-based products become comparable or better than their animal-derived equivalents, a prime limiting factor to more widespread consumption will be removed.

Data is currently less available on the plant-based meat market, but there are indications it could exceed that of other large markets around the world. Per a 2018 IPSOS survey, 63 percent of the Indian population would eat a plant-based meat substitute – the second-highest in the world, just behind China, and significantly ahead of countries where the plant-based sector is already well-established like the United States (38 percent) and the United Kingdom (49 percent).18

The market for plant-based foods in India is growing strongly, driven by an increase in access and products. The current plant-based milk and meat markets are estimated to be $20 million and $30-40 million, respectively.21,22

Access to plant-based foods is growing regionally and beyond major cities.23 Regionally, plant-based foods are already fairly well-established in Delhi, Telangana, Maharashtra, Haryana, and Karnataka and there is growing interest and availability in Andhra Pradesh, Punjab, Tamil Nadu, Uttar Pradesh, and West Bengal. Because many plant-based products require cold chains, including some which require deep freeze temperatures, access is limited by supporting infrastructure; as cold chain infrastructure expands and the number of ambient-temperature plant-based foods on the market grows, consumer access will increase significantly.

The market is evolving quickly and will continue to do so for the foreseeable future. Both multinational and Indian companies are active and there has been a recent surge in plant-based products in both the business-to-consumer and business-to-business categories.23 In the plant-based milk category, examples include Hershey’s (United States), Life Health Food (New Zealand), Borges (Spain) and Indian companies Raw Pressery, Drums Food International, NatureVit, and Urban Platter.21

Plant-based products are increasingly available at restaurants and coffee shops. Compared to their offerings in the United States, restaurant chains such as McDonald’s, Subway, and KFC already offer a wider range of plant-based foods. Café Coffee Day, India’s largest coffee chain with over 900 locations, offers multiple plant-based beverages and Starbucks, the world’s largest coffee chain and which currently operates over 250 locations in India, offers their customers soy, almond, and oat milks.24,25

India is a leading producer of crops rich in protein and well positioned to supply both the national and international plant-based foods sector.

The country ranks as one of the top five producers for each of a core set of plant proteins: chickpeas, lentils, millet, peas, rice, soybeans, and wheat. Analyzing pulses collectively, India is the largest producer by a significant margin, accounting for 24 percent of global production, followed next by Canada with 8 percent.16 India also stands alone in millet production, accounting for 41 percent of global production, with the next two top producers – Niger and China – producing less than half combined.15

Production of Plant Proteins in India (2020) 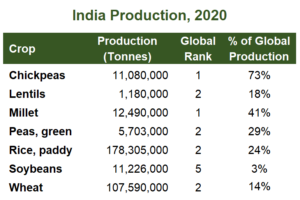 Credit: Food and Agriculture Organization of the United Nations

Production over the last decade has grown for all key plant proteins, though the gains range widely. Analyzing the combined production of 2009 and 2010 compared to 2019 and 2020, chickpeas, lentils, peas, rice, and wheat all saw production increases ranging from 21 to 89 percent. While chickpeas and millet also saw small production increases over the same period, production varies year to year – comparing only 2010 to 2020, crop production was lower in 2020 for both crops.15

Historical trends paint a similar picture. Production for rice, wheat, and pulses have shown strong positive growth rates since the 1950s. Meanwhile, jowar, bajra, ragi, and small millets have seen small growth since the 1960s and negative growth in some recent years.26

Credit: Food and Agriculture Organization of the United Nations

Technological innovation and government policies are expected to continue to drive overall growth for key plant-based food crops. For instance, after a period of low growth between 1990 and 2005, pulses will likely continue to be a strong growth driver due to a mix of higher-yielding hybrid seeds, improved mechanization, price support, and government procurement schemes.16 As it scales, the global plant-based food sector will reshape the demand and value of plant-protein crops – an opportunity for forward-leaning investors and governments.

The Government of India has been an important and effective supporter of the food processing sector, including as one of the pillars of its “Make in India” initiative. Infrastructure investments, advantageous financial and credit schemes, foreign direct investment policy, and centralized procurement schemes have propelled the sector’s growth. Federal examples of such support are reflected in Pradhan Mantri Kisan Sampada Yojana (PMKSY), the National Bank for Agriculture and Rural Development (NABARD),the Production Linked Incentive Scheme for Food Processing Industry (PLISFPI), and specific support for smaller enterprises.

In 2020, Finance Minister Smt. Nirmala Sitharaman announced a scheme worth $1.3 billion (Rs. 10,000 crore) to help micro food enterprises. Support will not only improve the mechanics and safety of production facilities themselves, it will also help them achieve FSSAI standards and better integrate into retail markets. All of the above will also increase access to and competition in an underutilized export market.29

Examples of state-level engagement include:

Dr. C Anandha Ramakrishnan, Director of the National Institute of Food Technology, Entrepreneurship and Management-Thanjavur, recently shared his optimism for Kerala using the One District One Product (ODOP) philosophy. Kerala Agricultural University (KAU) and the State Industries Department have teamed up to develop the ODOP concept, with the goal to help small businesses and focusing on the strengths of production.

Tribal women in Untnoor, Telangana, started a food processing plant for the first time in November 2020. The plant was a partnership between the Tribal Cooperative Finance Corporation Limited (TRICOR), the Telangana Tribal Welfare Department, the Ministry of Tribal Affairs, and the International Crops Research Institute for the Semi-Arid Tropics’ (ICRISAT) Agribusiness and Innovation Platform. The project intends to localize production and combat malnutrition while also improving tribal groups’ economic conditions, including providing goods to the tribal region’s government nutrition programmes and anganwadis.

The Government of Punjab established the “Punjab Food Processing Advisory Committee” in September 2020 to encourage investment in the food processing sector. Shri. Om Prakash Soni, Punjab Food Processing Minister, stated that this step will enhance farmer faith in the system since they will be able to receive fair rates for their crops. Captain Amarinder Singh, Punjab’s Former Chief Minister, has urged for special attention to be paid to the state’s food processing sector, which will enhance farmer earnings and the state’s economy.

The plant-based foods sector in India is projected to increase significantly over the next decade, driven by increased consumer interest and access, product innovation, and hundreds of millions in domestic and foreign private sector investment.

The Good Food Institute India and Deloitte produced an analysis which projects the Indian plant-based foods domestic and export markets in 2030. The analysis includes a range of scenarios based on different assumptions of consumer uptake.

This report is a private initiative of the Plant Based Foods Industry Association.