Four engineers responsible for the creation of the first truly global, satellite-based positioning system (GPS were awarded the Queen Elizabeth Prize for Engineering (QEPrize) in February 2019. The QEPrize is the world’s most prestigious engineering accolade, a £1 million prize that celebrates the immense daily impact that engineering innovation has on the lives of billions globally.

Dr Bradford Parkinson, Professor James Spilker, Jr, Hugo Fruehauf, and Richard Schwartz were announced as the 2019 winners by Lord Browne of Madingley, Chair of Trustees for the QEPrize. HRH The Princess Royal was in attendance at the Royal Academy of Engineering where the award was announced.

The development of GPS has fundamentally transformed nearly all elements of global society and is regarded as one of the most pioneering inventions of modern times. Today, an estimated four billion people around the world benefit from its free, accurate, and instant position and timing information. Its applications range from navigation and disaster relief through to climate monitoring systems, banking systems, and the foundation of tomorrow’s transport, agriculture, and industry.

The winners, building upon a set of novel technologies, integrated highly stable compact atomic clocks with what is now the GPS civil signal. This integration allows receivers to determine their position through trilateration – measuring the distances to multiple satellites simultaneously. The innovation was realised with a robust, long-lasting satellite design that resists the intense radiation from the upper Van Allen belt.

Lord Browne said: “The 2019 Queen Elizabeth Prize for Engineering has been awarded to the four engineers who gave billions of people around the world free access to accurate and immediate position and timing information. It is our hope that the revolutionary work of Dr Parkinson, Professor Spilker, Hugo Fruehauf, and Richard Schwartz – which epitomises the engineering excellence that the QEPrize both recognises and celebrates – inspires the next generation of engineers to take up the challenges of the future.”

The four winners will be formally honoured at a ceremony later this year; they will receive the £1 million prize and an iconic trophy designed by the 2019 Create the Trophy competition winner, 16-year-old Jack Jiang from Hong Kong. 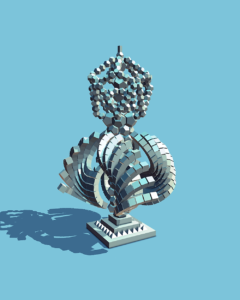 Entrants from more than 50 countries were able to create their designs via an app which presented shapes and sizes which could be used to build.  Jack’s intricate design impressed the judges with its complexity and balance, combining traditional trophy shapes with elements of modern wind turbines.

When asked about the inspiration behind his design, Jack said: “The inspiration behind this design came, in part, from more traditional trophy shapes. It was also inspired by the efforts of engineers working with sustainable technology, and so I incorporated the design of wind turbines, which can be seen from above.”