The patented City Air Purification System (CAPS), jointly developed by Sino Green and Arup, won Gold Medal at the 46th International Exhibition of Inventions Geneva.CAPS won Gold Medal in ‘Protection of the Environment — Energy’ category for its impact on improving air quality in open space. The International Exhibition of Inventions Geneva is widely known as the most important specialist event of its kind, attracting hundreds of exhibitors from around the world to showcase their inventions and innovations. 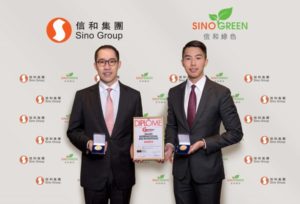 The prototype CAPS was fabricated in the form of a bus shelter. How it works -air is drawn into the system from an inlet at the bottom, the air current then passes through a bag filter, which is effective in removing fine suspended particles (PM10 and PM2.5), before coming out through the louvre overhead.  The system has been designed so that it can build up positive pressure with an air curtain, which acts as a barrier against pollutants.

The prototype has been tested in Hong Kong and Beijing, which both experience heavy road traffic and air pollution.  The empirical data showed that the system is capable of reducing the concentration of air pollutants within the system by 30% to 70% under various ambient conditions.

Mr David Ng, Group General Manager of Sino Group, remarked, “We are deeply honoured by the prestigious, international recognition bestowed on our humble idea.  It is very encouraging to see our conception brought to life and demonstrates real benefits to our society.  We hope it inspires more innovations and ideas to contribute to a greener future.”

“The innovation has wide applications for Hong Kong and China, including existing canopy structures of buildings in addition to transport network” added Mr Daryl Ng, Deputy Chairman of Sino Group. “We are planning additional locations for CAPS to benefit the wider community.  The award is an encouragement to our commitment to building a greener community, and supporting R&D in Hong Kong in its development into a technology and innovation hub.  We look forward to more innovative ideas and collaborations with universities and like-minded partners.”