As Hong Kong prepares to shake up its financial services sector by issuing licences for virtual banks, some applicants have shared at a public forum some of their plans for gaining a foothold in the banking services market. Several mentioned they expected the development would lead to further exciting business opportunities not only for them but also for other businesses in the city.

“We will go live next year,” if as hoped the Hong Kong Monetary Authority awarded a licence to his company, said Michael Gorriz, Group Chief Information Officer (CIO) of the bank Standard Chartered. His commentary came in a keynote speech at this year’s Hong Kong FinTech Week, held at the Hong Kong Convention and Exhibition Centre. The traditional lender is one of 29 entities – ranging from banks to financial technology companies to telecommunications operators –that have applied for the first batch of virtual bank licences in Hong Kong. It was expected that the Monetary Authority would issue the licences by year-end 2018, it had been reported by Hong Kong-based newspaper the South China Morning Post.

“In developed countries [and regions], much like Hong Kong, we see a growing demand of e-Banking services among the millennial and digital natives,” Mr Gorriz told the audience in Hong Kong FinTech Week. He was referring to the younger generation of consumers.

“What they are waiting for is actually the service customised for them when they are ready to do banking; not the other way round,” the executive added.

While noting that issuance of virtual bank licences would align Hong Kong with its counterpart financial service centres in the West, the Standard Chartered executive identified “three essential elements” necessary for such services to be successful locally. They were what he termed people, process and architecture.

While it was essential to hire experienced people and to have reliable internal systems ready to support the new initiative, it was also of paramount importance to speed up the way a service provider responded to consumers and market conditions. “How can we shrink the time from ideation to service, from months and years to days and weeks?” he asked rhetorically.

Another applicant for a Hong Kong licence for virtual banking is HKT, a joint venture by Bank of East Asia, Airwallex, a digital global payments company, and Sequoia Capital China. Speaking in a panel session also held at Hong Kong FinTech Week on the topic of virtual banking, Jack Zhang, Co-founder and CEO of Airwallex, said he believed the Hong Kong initiative on the matter could also help local small-and medium-sized enterprises (SMEs) to expand their businesses.

“There are over 300,000 SMEs in Hong Kong, and digital banks can provide new financial services and products to help them migrate from offline to online, from local to global,” said Mr Zhang. “We need to think out of the box… helping businesses to innovate, expand… and stay competitive in the new Internet era.”

For FinTech start-ups like Airwallex, he also stressed the importance of choosing the right partner when venturing into the Hong Kong market for financial services. It was advantageous to link with traditional telecommunications operators and traditional banks, which each have an existing customer base. That way, the FinTech companies could help the incumbents in terms of digital transformation of their businesses, and to create new and positive experiences for consumers regarding digital services they offer, he added. 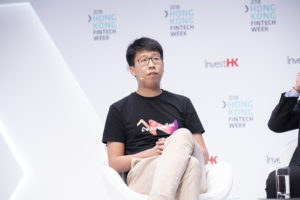 Simon Loong, founder and CEO of the home-grown FinTech firm WeLab, thinks convenience is the key consumer proposition when enticing Hong Kongers to use virtual banking services. His company, which runs the online moneylending platform WeLend in Hong Kong; and – with partners – the online lending platform WoLaiDai in mainland China, is also one of the 29 applicants for a Hong Kong virtual bank licence. “Digital adoption, especially financial services online, seems to be a young-population thing,” he said. “My parents didn’t use iPhones five years ago [and] now they all use iPhones.” Convenience as a criterion for choosing as service was “applicable for a broad range of consumers,” he added.

“Whoever is 20 years old and using WeLend today, I don’t envision them 15 years later queuing up at [traditional bank] branches for borrowing and other financial services,” Mr Loong added. The economic importance of this demographic group would “continue to expand” and more people would adopt FinTech and “enjoy” the experience of virtual services for banking,” he suggested. Another speaker at Hong Kong FinTech Week was a senior executive from WeBank, described as the first private-sector and digital-only lender on the Chinese mainland. It is owned by technology giant Tencent Holdings Ltd. In a keynote speech, Henry Ma, CIO of WeBank, said that on the mainland there were not many viable financing options available via the conventional banking sector, for individuals and SMEs. A WeBank survey showed only 9 percent of them would go to traditional financial institutions for borrowing, while others either ask family or friends, or simply fail to acquire the money they seek.

“The individuals and SMEs [on the mainland] are hugely underserved,” he said. Mr Ma stated that as a result, WeBank had partnered with other entities in the financial industry to serve this niche. After acquiring a relevant mainland licence in December 2014, WeBank had so far provided more than 30 products for a customer base of over 80 million, he revealed.