DeepBrain AI demonstrated how it can support consumer facing industries and change the future of customer engagement at CommunicAsia held at Singapore Expo, June 1-3, 2022. DeepBrain AI is an artificial intelligence (AI) company specializing in video, voice synthesis and AI Human solutions. The company is based in South Korea and specializes in humanizing digital customer service and bridging the gap between enterprises and their customers.

Prior to the Singapore Expo, the company announced it will enter the Japanese market by setting up a branch office in Tokyo and unveil AI Human (Virtual Human) technology to innovate consumer facing industries. Whether implemented as an AI Shop Assistant, AI Receptionist, or any other form of AI Human, the AI Human will guide the process with an ultra-realistic video, looking just like a real person, that simulates the AI-led experience. The AI Humans can also be implemented as a virtual chatbot to enable real-time interactive question and answers. 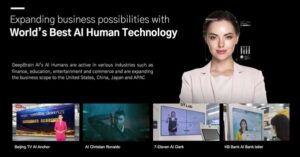 Since 2016, DeepBrain AI has attracted numerous leading companies as its clients in various industries including finance, retail, media, education, etc. The company has successfully raised $44 million in a series B round at a post-money valuation of $180 million.

DeepBrain AI has already delivered numerous projects with a number of consumer facing businesses such as KB Bank, 7-Eleven, Korea Telecom, KYOWON and broadcasting companies such as MBN, CCTV, Beijing TV and more. Apart from working on commercial projects,the company also collaborated with presidential candidate Yoon and his election campaign by creating an AI presidential candidate Yoon. The candidate was elected the next president of Korea.

At the Singapore Expo,DeepBrain AI also exhibited the “AI STUDIOS” platform, a video synthesis and editing platform that allows for script-to-video editing to produce instructional and promotional video content directly. One of the most prominent features of AI STUDIOS services is that anyone can create video content featuring Virtual Humans without separate technologies and equipment for video and voice synthesis. DeepBrain AI provided visitors with hands-on experiences such as selecting the AI model entering the text they want Virtual Humans to say.