The Unit 5 of China’s Fuqing Nuclear Power Plant is the world’s first Demonstration project to adopt China’s indigenous Generation III nuclear power technology Hualong One, also known as HPR1000. It  was put into commercial operation on January  30 ( 2021) according to an announcement from China National Nuclear Corporation (CNNC).

With a design life of 60 years, the Hualong One reactor adopts a 177-reactor core design that reqires refueling the fuel only every 18 months. It innovatively uses a combination of “active and passive” safety systems and a double-shell containment, which meets the latest international nuclear safety requirements. 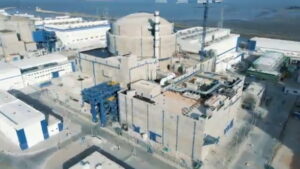 The installed capacity of each Hualong One unit reaches nearly 1200 MWe, and each unit is able to generate nearly 10 billion kWh of electricity annually, meeting the demand of 1 million people within a moderately developed country.

Two Hualong One units are under construction at Pakistan’s Karachi nuclear power plant which are scheduled to be operational in 2021 and 2022.

Yu Jianfeng, chairman of CNNC, said that the corporation will accelerate the progress of mass constructing Hualong One reactors and developing new series technologies in a bid to promote the Hualong One for export and aim to achieve carbon neutrality.

With the latest announcement of Unit 5 at Fuqing Nuclear Power Plant,CNNC now has a total of 23 nuclear power reactors in operation with a combined generating capacity of 21.4 GWe.